RUSSIAN INVASION OF UKRAINE: LONDON PROTESTS CONTINUE IN MAY 2022 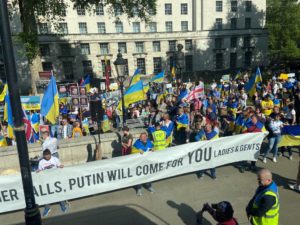 Crowd of protesters in Whitehall

Since the start of Russia’s invasion of Ukraine on February 25th, supporters of Ukraine from across the world have continued to protest against President Putin’s invasion. In London, the crowds that still gather after 70 days since Russia invaded Ukraine show that people continue to spread awareness of the violence that is occurring in Ukraine.

The ‘Londonist’ shows how London has reacted to the early stages of the invasion in Ukraine:  https://londonist.com/london/news/ukraine-reaction-london

Crowds had gathered in Whitehall on May 7th and 8th, with people holding their own blue and yellow flags of Ukraine in solidarity. People were also holding a long banner which read:

”When the last Ukrainian soldier falls, Putin will come for YOU, ladies & gents.”

Voicing our fears of the grim violence that Putin will cause to other countries after Ukraine may be defeated. This echoes Putin’s own words of the ‘consequences greater than any you have faced in history’ if any country attempts to interfere against his invasions. 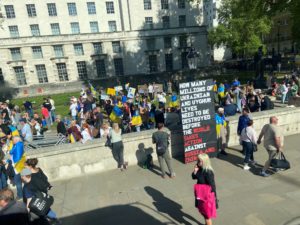 THE COMPARISON BETWEEN UKRAINIANS AND UYGHUR MUSLIMS IN CHINA

During the Whitehall protests, a man held a large poster, as seen is the photo above, which read:

”How many millions of Ukrainian and Uyghur lives need to be destroyed before the world takes action against Russia and China?”

The Uyghurs are a minority ethnic group in Xinjiang, China. Human rights groups believe China has imprisoned over one million Uyghur Muslims against their will over the past few years. The state has sent these people to “re-education camps.” Several countries have accused China of committing genocide in Xinjiang.

At Uyghur Times, people speak about how whilst Ukrainians are able to flee from the violence being put onto them, the Uyghur Muslims being held against their will are unable to flee: https://www.uyghurtimes.com/posts/0c863da0-ce22-4f76-a95e-8b31d871d4ab/why-uyghurs-are-envious-of-ukrainians

People are fighting against such drastic violence against the Uyghurs as well as the Ukrainians. This poses the question: why do these elite nations and elite people use their power for violence and conflict?

We must fight against the elites who play God and do what they wish with the power that they have. They commit horrible acts of terrorism and end innocent lives and get away with it. With the threat of a third world war, we are only letting history repeat itself. President Putin has been labelled ‘Hitler of the 21st Century’ by Ireland’s deputy premier Leo Varadkar.

When will leaders show compassion to those already suffering and not cause new problems to innocent people?

Be the first to comment on "RUSSIAN INVASION: LONDON PROTESTS"