As Brits tackle a third national lockdown, QAnon conspiracy theories, supported by right-wing extremists, have made their way into British homes, affecting the lives of many, regardless of ethnic background. A former QAnon member reveals how he was brainwashed online.

According to several former and current members, the rapid spread in QAnon theories ranging from microchipped vaccines to Satan-worshipping elites occurred during the first lockdown in March 2019, because people were searching for clarity in a time of uncertainty.

One of these self-proclaimed patriots is Mike*. He is a 34-year-old former barman who was made redundant during the start of the pandemic. Mike told me, “QAnon is a group of patriots. We are soldiers fighting for the truth and uncovering corruption across the world… We are fighting for freedom and against the enemies of thiscountry.”

Many people I spoke to echoed Mike’s thoughts. Some of them admitted being part of the group gave them a sense of security and increased their knowledge of world- events. Although, they refused to acknowledge that the information they believe in is false.

Michelle*, a 38-year-old hairdresser and a current QAnon member, said, “I’ve always known these things. There’s so much evidence for them. All you have to do is Google it and it’s all there. It’s not new.”

She states that QAnon has only confirmed her beliefs, “People tell me all the time this stuff is false but it’s not. The Holocaust numbers aren’t real, it’s all false and like sheep the rest of the world just believes it. We’re not the crazy ones. Q is posting the truth… Wake up! The Great Awakening is coming.”

One of the many issues with QAnon theories is that they originate from white supremacist ideology but this has not stopped people from BAME backgrounds from becoming members of the group.

The study I carried out found that more than half of the participants who admitted to being ‘active members’ were Black and/or Asian.

Joshua*, a 46-year-old builder, who identifies as a South Asian male, told me, “it’s not about being black or brown or white, it’s about the truth.” When questioned on the group’s history of antisemitism and antimigrant rhetoric he dismissed the claims and said, “I don’t care about that… So what anyways?”

He then went on to explain what made him become a believer, “it’s all this covid nonsense. They’re [the British government and world leaders] lying to us, they wanna kill us, chip us, brainwash us into being sheep.” He added, “the vaccine isn’t real, they want to microchip us.”

Furthermore, a recent study, by the organisation Hope Not Hate, has shown one in four people in the UK believe in QAnon linked theories.

In an interview with the BBC, a researcher for the campaign group Hope Not Hate, David Lawrence, partially blamed a lack of trust in institutions for the spread of QAnon during the pandemic.

Another major factor causing many people across the country to become exploited by white supremacist organisations like QAnon is economic uncertainty.

Harry*, a former Q believer and a 51-year-old small business owner, told me his financial situation and the instability brought by the pandemic caused him to fall victim to the conspiracies. “It was the worry of not having enough money. I had economic anxiety and I was vulnerable. My vulnerability was exploited…and I startedbelieving all this s**t. My business had to close, my employees were sent home, I had no money coming in to feed my family. That’s when I turned to groups online and I met these people who then became my friends. With them I believed that the government was playing with our lives, I believed in Pizzagate and that there was a global plot to kill us with covid.”

Harry refused to tell me if he believed in any antisemitic or xenophobic lies during his time as a QAnon member.

Mr Lawrence, from Hope Not Hate, also told the BBC, “Long before the birth of QAnon, prominent British conspiracy theorists have promoted ideas about elite, occult paedophile circles engaging in large-scale child trafficking and abuse, and British activists are drawing on this broader tradition.”

A willingness to believe in conspiracy theories has caused many adults to become susceptible to outlandish claims like the earth being flat. And figures show there has been a 174% increase in Q-anon posts throughout the Covid-19 pandemic. This means groups like QAnon could be poaching ordinary Brits who are stuck at home and using the internet a lot more.

The stark increase in posts has also led to a worrying trend in misinformation and hate-speech being spread on mainstream social media sites. One of the many reasons for this is because groups like QAnon have moved from less common online forums such as 8chan to more widely accessible sites like Facebook.

An internal investigation conducted by Facebook found more than 3 million QAnon members on its platform, according to NBC News.

One of these potential members was Harry. He briefly described how he was radicalised, “The virus was something new, nobody had heard of it before and it left me scared so like most people I turned to the internet to search for answers. I ended up falling down a deep rabbit hole and became brainwashed. I met friends from Facebook groups who would tell me things like the stuff about 5G towers. At first, I didn’t believe it, but they were so persistent, so it slowly changed my mind and I started thinking all that stuff too.”

He opened up about the dangers of the group and warned, “People need to beware of what they read and believe online… it can be dangerous.”

The threat that QAnon poses to democracy was displayed during the insurrection at the US Capitol, which led to the death of 5 people, including a police officer.

The Global Network on Extremism and Technology has even labelled QAnon a “violent ideology”.

Like many people, QAnon consumed Harry’s life and impacted his relationships. “My wife nearly left me… It was that bad. She was scared for me. She was scared of me. To her it was like I had become a monster… But I started listening to her advice because I knew she loved me, and she was kind to me even when I wasn’t kind to her or myself. I didn’t want to lose her… I was lucky because it was still relatively new to me.”

Unfortunately, many people across the country aren’t as lucky as Harry. Julia*, a writer from the South of England, lost a childhood friend to QAnon. She told me, “It was heart breaking to lose her. I think groups like QAnon offer a sense of belonging, they make people feel important and give them a sense of self-importance.”

Some former members have been offering advice to people on how to help a QAnon believer change. One former member posted a Reddit AMA in which he explained the best methods to help someone and described how he felt during his time as a member. In his post he insists on creating a sense of stability around the person so they can turn to you, as well as exploring their doubts.

The man who goes by the username “u/diceblue” says, “A significant portion of these theories present a gloomy, scary view of the world. My days obsessed with The Truthtm were some of my most depressed. Realize that behind the obsession, arrogance, and certainty is a lot of repressed fear and hurt.”

“Conspiracy thinking hooks the brain because it feels like critical thinking. Even though it isn’t,” he added.

Ben Collins, a reporter who has carried out extensive research on the group, wrote in the Neiman Lab Prediction for Journalism 2021, “A lot of people disappeared off into a bad space in 2020. It was their only way to cope. Don’t blame them. Let’s take their journey seriously and give people the words to welcome them home.”

Some Q believers are so extreme they’d be classed as white supremacists, but your friend, neighbour or family member could just be starting to follow the group and

there may still be time for you to save them so, by following the advice given by Collins and former members like the ones I spoke to, you could save someone from the hands of Q.

**Towards the end of my investigating into QAnon, a letter was posted into my home by a Q believer. In this letter, there is a call for warriors who are willing to fight. The letter is just one example, of many, that shows this group is not niche, and poses a huge threat to British society.** 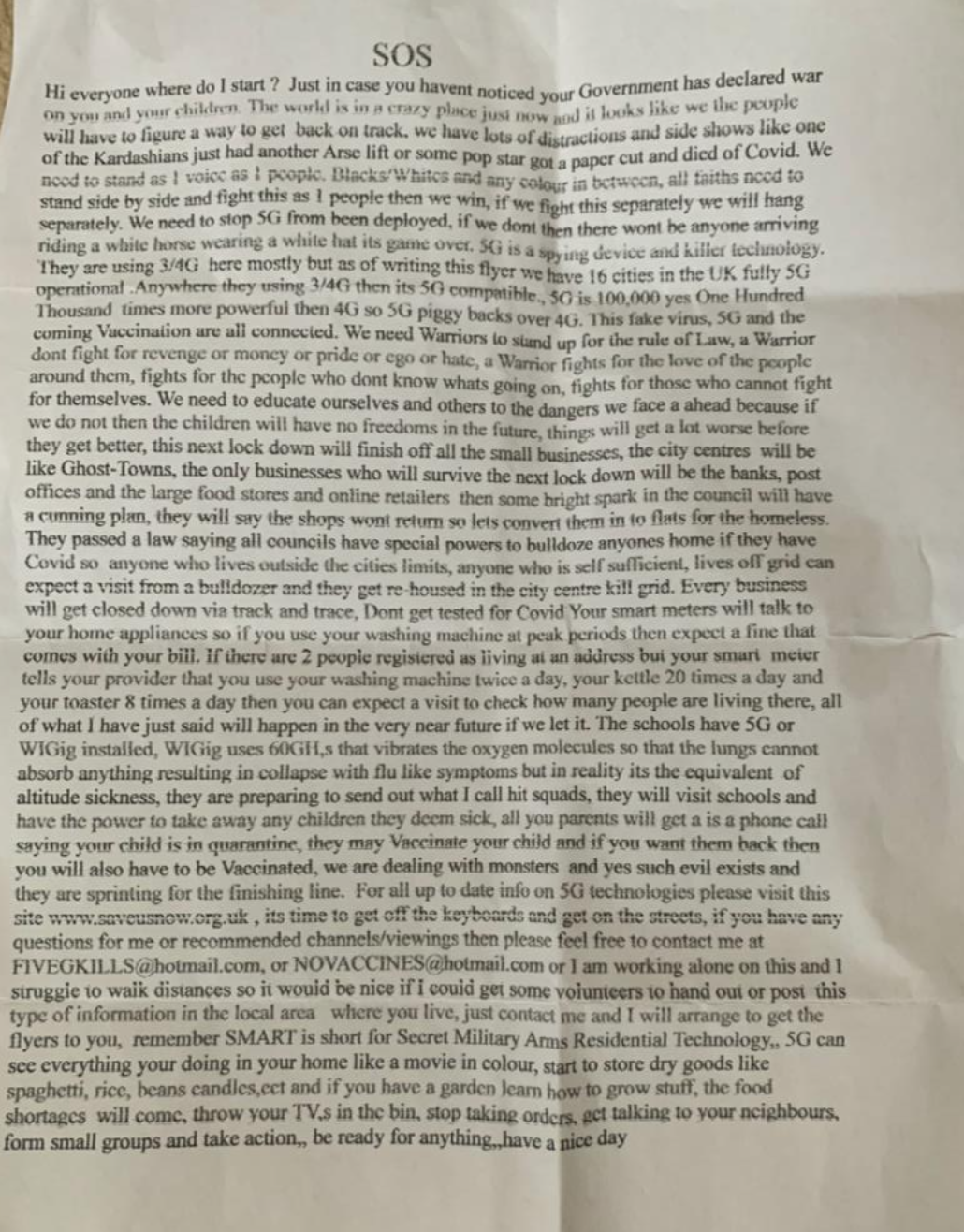